To kick off my two-month sabbatical and facilitate disconnecting from work, we decided a trip was in order. So we mapped out our itinerary back in April and booked our flights, rental car, and hotel rooms for an epic road trip starting in Seattle. I had never been to Washington or Oregon and since domestic travel was still iffy and international travel was really dicey, a west coast trip it was. Not to mention, we wanted to see Jake’s parents and connect with some LA friends – oh, and now we have officially travelled the entire west coast together.

We began with two days in Seattle where we picked up our rental and booked a hotel in downtown Seattle, so we could walk to all the typical tourist attractions.

From Seattle, we took a car ferry across the Puget Sound to the Olympic Peninsula. From there, we drove along the northern coast visiting Sul Duc falls, Lake Crescent (a gorgeous glacier formed/glacier fed lake), and attempted to visit the most northwestern part of the US at Cape Flattery. We, however, didn’t realize that many Indian reservations remain closed, so Cape Flattery was a no go. That also meant we weren’t able to visit La Push when we stayed in Forks to the chagrin of my sister’s Twilight loving heart (and admittedly mine too). But we did go the beach just north of La Push called Rialto. There are 29 federally recognized tribes in Washington – the two reservations we were unable visit were those of the Makah and Quileute.

Forks doesn’t have a lot in it. We ended up at a restaurant though with pretty good food and met a really interesting couple that out of nowhere picked up and bought a fishery up near Cape Flattery.

From Forks, we headed towards Oregon. We made a stop at Cape Disappointment – which as it turns out did disappoint, but just a little. In addition to the lighthouse there, I also wanted to hike down a trail to the coast – but it was closed. So we instead jumped in the car and headed to Astoria and checked out all the Goonies spots and stayed at Cannon Beach, which was adorable. From there we visited Cape Kiwanda, home of the Haystack Rock and flat bottom boats that just skid right up onto the beach. We checked out the Devil’s Punchbowl and Thor’s Well (a blow hole basically) and stayed in Yachats for the night where we enjoyed some local brews and vinos.

I had high expectations for the next day in which we would drive through the Boardman State Scenic Corridor, which is just a coast of stacks and arches. It turned out to be a super foggy day and cooler, which was actually kind of great since the next day we would be heading inland to Medford Oregon to make the trek to Crater Lake where temperatures were around 113. Eeeek. In order to get to Crater Lake, you actually have to drive south into California and then back north east along the Rogue River. It’s definitely not easy to get to, but sooo worth it.

We stayed an extra day in Medford because we had our final adoption class that night. Then we drove the almost two hours north into Crater Lake National Park to lay eyes on the imploded volcano now lake that Klamath Tribe describe as “giiwas” or a sacred place. And it truly is – it’s one of the deepest lakes in the world and takes the title of clearest creating a blue that is other worldly. We ended our day and stay at Crater at a local blessedly AC’d winery.

Next up – California where just two minutes after getting on the 101 we had a small rock that hit our windshield that proceeded to form a crack about 18 inches long over the next four days. But we were not deterred. Our next stop was to Klamath in the middle of the Redwood National Forest- a very small town home to the Yurok who operate a casino in the hotel where we stayed that has one of the two restaurants in town. The Yurok are the biggest tribe in California and help to preserve the land and continue to fish salmon on the Klamath River. We visited Fern Canyon – which is right around where white settlers first discovered gold in the area and drove through a very much still alive Redwood managed and owned by a woman who gave us her life story in 3 minutes.

From Klamath we drove through the Avenue of the Giants and landed in Redway – with short stop at Ferndale – an adorable town nestled at the base of the mountains with all victorian architecture. In Redway, we stayed at one very sketchy hotel, but had some great food at the Lost Frenchman and street tacos at a local bar where we met two very fun women and a whole host of interesting folks.

We decided to take Hwy 1 where it originates in Leggett, which I regretted 20 minutes into our two hour drive of windy switchbacks up to Mendocino (insert vomit emoji here). We stayed in Jenner by the Sea and visited Bodega Bay. It was after dinner and taking sunset pictures, that we went to the one store in Jenner to pick up some wine and Jake saw his doppelganger – or more like Jake’s doppelganger saw him – Aaron Rogers along with Shailene Woodley (who we had no idea were dating). This is only something that would happen with Jake.

Before heading to Cayucos, we spent a night in Santa Cruz. We saw Shark Fin Cove and then spent the afternoon at a small winery a few minutes from the coast among the Redwoods called Beauregard – it was perfection. We ended our night at dinner at the hotel where a couple was celebrating their 89th birthdays that the band played for and they did a swing dance to everyone’s delight.

We planned our trip so we could spend it in Cayucos for the 4th with Jake’s parents where we also drove up to the southern part of Big Sur for live music and drinks, took in sand castle building on the beach, and then watched the fireworks. From there we headed to LA for our last night night where we had a little get together with our closest folks and Lemeirt neighbors. It was an incredible 16 days. 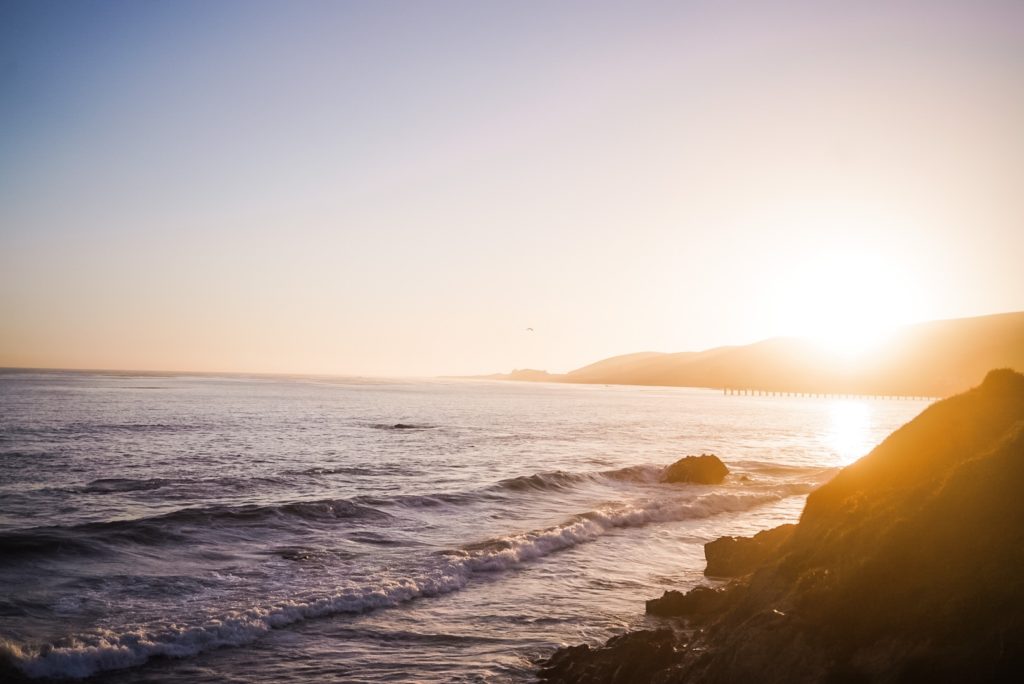